The idea of purchasing used cars based on their price and their potential remaining lifespan is quite relevant for used car buyers. iSeeCars has published a list of five and 10-year-old cars, their price, mileage, and how many more miles are left on the clock. These are approximations based on data gathered by iSeeCars. For the five-year-old list, half of the models come from Toyota.

No first car shopping list is complete without including the Toyota Corolla. iSeeCars reports the average price of a five-year-old Corolla to be $18,661. A 2023 Toyota Corolla ranges between approximately $21k-27k, so depending on the trim you’re looking for, $18k could be quite the attractive discount. iSeeCars reports the average Corolla lifespan at 204,226 miles and suggests that the typical five-year-old example has 136,534 miles left on the clock.

The Corolla has always been a relatively stout vehicle, so though it’s not surprising to see it on this list, this information identifies why cars like the Corolla can be worth paying a bit extra for.

The Corolla’s big, V6 optional brother is another entirely expected member of this list. iSeeCars reports that the average five-year-old Toyota Camry will cost you $20,482. A new Camry ranges from $25,945 for a base LE to $36,370 for an XSE V6. Given the reported potential lifespan is 223,249 miles, this means you get an impressive 153,517 miles of relatively trouble-free Camry all to yourself. Considering the average Camry will sell for nearly $30k, a $10k discount is very compelling, given the exceptional lifespan.

Hybrids always command a premium, which holds true on the used market. A five-year-old Toyota Camry Hybrid will set you back a bit more than the ICE version, with an average price of $22,997. Given that a new Camry hybrid ranges from $28k-33.5k, the savings will likely be identical to the non-hybrid trims. Interestingly, iSeeCars reports the Camry Hybrid as having a longer potential lifespan than the regular model at 230,547 miles. This just goes to show how good Toyota is at making its hybrid drivetrains. That said, despite the excellent lifespan, the cost per 1,000 miles is $143. This makes the ICE Camry slightly more economical at first glance, but when you factor in the Prius level fuel economy, the Camry Hybrid will end up saving you more in the long haul.

Sadly, the Toyota Avalon is no longer with us. While we will not have any model years extending beyond 2022, you might be consoled by the Avalon’s longevity. If you want to hold onto your big FWD sedan for years to come, fear not, for iSeeCars reports the potential lifespan at 245,710 miles.

The 2022 Avalon had a starting price of $37,920, which makes the $26,104 average five-year-old price one of the most compelling on the list. Perhaps most notable is just how much of the car’s lifespan the five-year-old buyer gets to enjoy. The Avalon tops the list with 76.3% or 187,385 miles remaining for the average five-year-old example. Most cars don’t even make it to 187k miles when new. 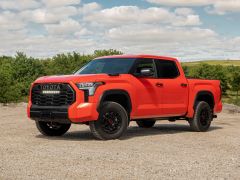 4 Toyota Models You Didn’t Know Were Available as Hybrids

Oh, how the automotive community used to hate the Toyota Prius. In recent years the Prius has widely been accepted as a phenomenal vehicle, albeit quite dull to drive. It is worth mentioning that the upcoming 2023 includes drivetrain upgrades, a completely new and attractive design, and even better fuel economy. This may be reason enough to opt for the new Prius, which starts at $27,450. That said, a five-year-old Prius has the longest potential lifespan on the list. iSeeCars reports a potential 250,601 miles for the Prius. Unfortunately, it also offers the smallest savings, with the average price of a five-year-old example coming in at $24,208. For comparison, the 2022 model year Prius had a starting price of $25,075.

A used Toyota is always safe

This list certainly indicates a universal truth agreed upon by most educated used car shoppers: Toyotas last a long, long time. Now, the Prius doesn’t represent much in the way of financial savings, but you are saving quite a bit with the other four models. Buying used isn’t for everyone, but at least with Toyotas, you know you’ll always have plenty of miles left on the clock.