The 1990s produced some interesting and fun cars in the U.S. Be it supercharged sedans, rugged SUVs, or affordable two-seaters, there were plenty of new and improving options on the car market. One of the cars from that decade that gained a following is the Honda Del Sol, a two-seater Honda Civic relative with a targa top.

The Honda Civic Del Sol, a two-seater targa top car, succeeded the Honda CR-X starting in the 1993 model year. It was based on the Honda Civic platform and was in production through 1997 for North America. Starting in 1995, the name was shortened to the Honda Del Sol. According to Edmunds, it was a front-wheel drive competitor to the rear-wheel drive Mazda Miata, and nearly 75,000 units were sold in the U.S. during its run. In the years since, it’s become a beloved two-seat roadster. It’s light, powerful, stylish, and fun to drive. Here are five reasons to fall in love with the Honda Del Sol:

One of the signature features of the Honda Del Sol is its targa top. HotCars reported that Porsche coined the term of a removable roof section that stores behind the seats. This means you can have the benefit of a convertible with the safety of a hard top.

Owners could remove hard top on the Honda Del Sol and store it in the trunk thanks to a built-in rack. This allowed for you to still use the trunk space while storing the targa top. This made it easy for the Honda Del Sol to go from a two-seat roadster to a convertible. Given that the name Del Sol translates from Spanish to “of the sun”, it was easy to enjoy a nice drive in sunny weather in the roadster.

Even with the targa top stored in the trunk, you still had plenty of space for cargo in the Honda Del Sol. The in-trunk rack would secure it quickly and easily.

For Honda Del Sol models sold in Europe and Asia, there was a special automatic mechanism for removing the targa top called the “TransTop”. With the TransTop, the Del Sol’s trunk rises up to the level of the targa top. Arms from the trunk then retract the roadster roof into the trunk lid itself and the whole unit returns into the trunk area, leaving the driver in convertible mode. The whole process takes less than a minute. The TransTop process was a complicated way of doing a relatively simple task. So its no surprise that the U.S. didn’t adopt the models.

Additionally, the VTEC models had upgrades to handle the increased power including stronger suspension components, larger brakes, and bigger tires.

The sporty yet comfortable interior 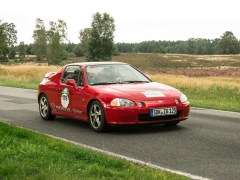 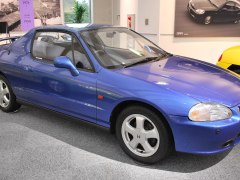 The factory options for the Honda Del Sol struck a good balance between comfort and looks. In fact, MotorTrend calls the bucket seats some of the more comfortable ones you’ll find but the red stripe down the middle gave it an aftermarket look.

With large doors and low seating, CarThrottle reviewers note that it felt like you were sitting in a go-kart. The bucket seats conform to the driver’s body easily and comfortably. The hard plastic dashboard and console give a high-quality feel to the interior.