Rodney Dangerfield coined the classic line “I get no respect” in his comedy act. In a similar fashion, there have been some incredible classic muscle cars over the years that should feel the same way. These cars were amazing machines with plenty of power, style, performance, and speed, but they never quite got the respect they deserved.

The 1962 Pontiac Catalina was an excellent American muscle car

This classic car came with a tri-power 389 engine and four-speed manual transmission, but Pontiac didn’t have a GTO to put this engine in. Instead, this big powertrain was added to the full-size Catalina convertible, which became a fantastic car with a powerful V8 engine. This 1962 Pontiac produced 318 horsepower while being one of the most overlooked muscle cars in history.

Don Yenko was the top Chevrolet dealer in the 1960s and was given a long leash to do basically whatever he wanted. His influence on the Chevrolet lineup brought us the famous COPO Camaro and Yenko Camaro models, but it also brought one more model to the market. The COPO Nova was much less known and used the LT1 power from the Corvette. This gave the Nova 360 horsepower and a massive V8 engine. Still, the Nova became the punchline of many jokes, much like Rodney Dangerfield’s self-deprecating comedy act.

The 1969 Dodge Charger 500 came with a unique aero package designed for NASCAR racing, but the Charger 500 never became one of the most powerful models. In fact, the 1970 version of this trim was pushed down to be nothing more than a trim option of the R?T and SE models. The 1970 Charger 500 was never really its own trim, which was extremely disrespectful.

GM built the 1966 Oldsmobile 54 W30 to be eligible for stock drag racing classes. These classic American muscle cars used powerful engines and included a battery that was repositioned to the trunk. The OAI system made this car unique. This item was not installed on the original 54 cars but sold as a dealer-installed Trac Pac kit. There were 93 of these kits sold to the public, making this Oldsmobile one of the rarest but most often overlooked muscle cars.

Prior to this version of the Firebird, this classic Pontiac muscle car was being beaten on the track by other car names.  The response was for Pontiac to bring the Ram Air II option to all models of the 400-ci Ram Air Firebirds. This system gave the car more power and let it hit the track to take down the competition. This car became a low-volume, dominant NHRA stock car that racers loved but was rarely seen outside of the drag circuit.

MotorTrend talks about these five classic muscle cars that were often overlooked. This made them perfect candidates for the disrespected comedy act made famous by Rodney Dangerfield.

Next, check out modern muscle cars with manual transmissions, or enjoy more muscle cars in this video below: 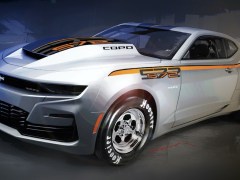