We recently had the chance to test out the 2023 Toyota Camry Hybrid SE Nightshade and were impressed with some of the newer features it had to offer. Sure, it could have come with a bit more, but that’s what the higher trim levels are for. Regardless, check out these four awesome features that we found on this aesthetically pleasing trim level.

1. The 19-inch bronze TRD wheels match the paint better than you would think

To be honest, we’re typically not fans of bronze wheels. The dark golden hue doesn’t match well with most body colors, and it reminds us a lot of an old-school Subaru Impreza WRX. However, when the 2023 Toyota Camry Nightshade was dropped off, we were pleasantly surprised at how well the dark blue paint job matched the 19-inch bronze wheels.

If the dark blue color doesn’t do it for you, this trim level is also available in black and white, which matches the wheels just as well.

To complement the bronze wheels, Toyota tacked some black exterior accents on the Camry Nightshade for a more menacing look. There’s a black front grille with a Sport Mesh insert, a black rear spoiler, black mirror caps, and black-trimmed head and taillights to complete the look. These accents give the Camry a much-needed boost in the aesthetics department. So much so that it’s safe to say that the Camry is no longer boring.

3. The Sport SofTex-trimmed seats are comfortable and feel nice

Although the higher 2023 Camry trim levels offer leather-trimmed seats, we liked the SofTex-trimmed sport seats in the Hybrid Nightshade. They provide a lot of comfort, feel nice, and look sporty enough to fit the car’s exterior aesthetics well. 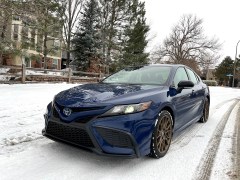 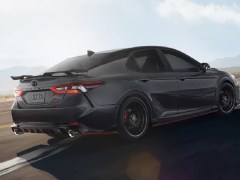 Under the hood of every 2023 Toyota Camry Hybrid model is a Toyota Hybrid System, which consists of a 2.5-liter four-cylinder engine paired with an electric motor. Together, the system puts out 208 hp, but Toyota is mum about the torque rating. The numbers don’t matter, though, as the engine provides plenty of power when accelerating onto the freeway and passing slower cars.

As for fuel efficiency, the EPA estimates the Camry Hybrid can achieve up to 44 mpg in the city and 47 mpg on the highway. In our testing, we managed to get an average of 38 mpg in combined driving situations. Admittedly, that’s a little lower than the estimates but still good for a midsize sedan.

Ultimately, we enjoyed our time with the 2023 Toyota Camry Hybrid SE Nightshade. We wished it had more features like the upgraded audio system and touchscreen, which you can get on the higher Camry trim levels. However, with an MSRP of around $33,000, this Camry SE Nightshade edition is hard to beat.

If you’re looking to get into a 2023 Toyota Camry and want to save money at the pump and up front, we highly recommend this entry-level trim.