Plenty of standard tech in the 2017 Nissan Maxima

For 2017, the Maxima added several standard technology features that give it the edge over other models from the time. It comes with Apple CarPlay on every new model for easy iPhone integration. You’ll also get a wealth of standard driver assistance features. Forward collision warning and automatic emergency braking became standard on the Nissan Maxima in 2017. These touches earned the Maxima an IIHS Top Safety Pick+ award, and gives this five-year-old model standard features that some modern cars still don’t deliver.

The 2017 Nissan Maxima came standard with a 3.5-liter V6 in a time when its competition was opting for four-cylinder engines. That makes the Maxima a compelling choice, delivering 300 horsepower in a category where 200 ponies is the norm. The Maxima also lives up to its “four-door sports car” marketing with sharper handling than similar rivals, according to Car and Driver. When compared to contemporaries like the Toyota Avalon and Volkswagen Passat, the Maxima delivers a more engaging drive while retaining a high level of comfort.

Uniquely upscale, the 2017 Nissan Maxima adds flourishes to give you a near-luxury feel at a much lower price point. Wood grain accents and quilted leather show a nice attention to detail. And features like heated and ventilated seats keep you supremely comfortable.

The cons of choosing the 2017 Nissan Maxima:

The 2017 Nissan Maxima is undoubtedly large from the exterior perspective, so the lack of back seat space and trunk area are disappointing. It sports one of the smallest cargo areas in its class at just 14 cubic feet, and the mere 34.2 inches of rear leg room means that taller riders will have trouble fitting behind you. For perspective, the competing Toyota Avalon of the same year gives you over 39 inches of legroom.

For its place in the mid-size sedan category, it’s surprising that the 2017 Nissan Maxima isn’t offered with all-wheel drive. We expect front-drive to be standard from any Nissan model, but the premium status of the Maxima makes the lack of an all-wheel drive option a disappointment. When new, the Maxima’s price point rivaled models like the Volvo S60 and Acura TLX, both of which offer all-wheel drive variants. 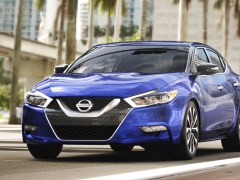 With a wealth of comfort, style, and performance, the 2017 Nissan Maxima is a great choice for your next used car. Plenty of power, sharper handling than similar options, and an upscale cabin makes the Maxima a good used car to consider.