The Toyota Tacoma is one of the most trusted, reliable, and well-loved midsize trucks in the entire market. While the rest of the midsize trucks packed up and left, the Tacoma (and Nissan Frontier) stood tall and carried the class. Even though this Toyota truck has been the torch-bearer of the class for many years, it has some issues of which you should be aware.

To learn about the most common Toyota Tacoma problems, we turn to the experts at RepairPal. Its list of the top three issues for this midsize Toyota truck are:

Of these three issues, the lower ball joint problem is the only one that caused Toyota to issue a recall. That said, experiencing any of these three problems could be worrisome.

How serious is the lower ball joint issue?

The most common Toyota Tacoma problem involves a recall for the lower ball joint. This recall was issued due to some models experiencing premature wear from improper finishing during production. The ball joint will be replaced under the recall for the 2001-2004 model years only.

Tacoma owners with other model-year trucks will need to replace the item if it’s worn. The average cost for the ball joint replacement is between $229 and $448.

What’s the fix for the automatic transmission not shifting?

Car parts get worn. As owners reach higher mileage numbers in the Toyota Tacoma, one of the most common problems is the automatic transmission not shifting correctly. When this problem appears, the throttle position sensor is out of adjustment or a shift solenoid needs replacing. Thankfully, when this problem appears, the transmission does not need to be completely replaced.

How can Toyota Tacaom owners fix the cracked or melted amber lights?

Is the Toyota Tacoma a reliable pickup truck?

The average annual cost to repair and maintain a Toyota Tacoma is $478. This is lower than the average for midsize trucks of $548, which is certainly in favor of this Toyota truck.

Tacoma owners bring their vehicles to the repair shop for unscheduled repairs an average of 0.3 times per year. The average for all midsize trucks is 0.2 times per year. Could these visits be for some of the most common Toyota Tacoma problems? Possibly.

This is where the Toyota Tacoma’s reliability rating takes its biggest hit. The probability of unscheduled repairs being severe for this Toyota truck is 17% compared to 13% for midsize trucks. That’s a significant difference.

New Toyota Tacoma models seem to have lost their long-time reliability ratings. It’s possible Toyota has rested on its laurels, and newer models of this midsize Toyota truck aren’t as trustworthy as they once were. New electronics, more trims, and stiffer competition have pushed the reliability ratings for the Tacoma down the list.

Best versus most reliable: Which do you prefer?

Kelley Blue Book ranks the 2023 Toyota Tacoma as the best midsize truck in its class. That’s not too surprising; this Toyota truck has been a stalwart of the class and continues to offer trims, equipment, and the capabilities many consumers desire.

“The Toyota Tacoma is our Midsize Truck Best Buy of 2023. It’s tough, well-built, retains its value better than any rival, and it’s a rock star off-road.” – Kelley Blue Book

If you’re more concerned with reliability, you may wish to turn to the list from iSeeCars.com, which lists the top 2023 midsize trucks for reliability as:

Can you live with your truck landing second on this list? If so, the Toyota Tacoma could bring the reliability and quality you want during your time on and off the roads.

Next, check out why Toyota won’t make a larger Tacoma or learn more about the 2023 Toyota Tacoma in this video below: 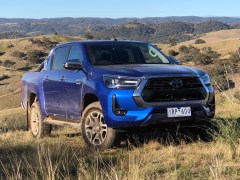 Will the 2024 Toyota Tacoma Share More With the Hilux Than Ever Before?