In a recent media briefing with Honda Vice President of Sale Mamadou Diallo, it was announced that a new Honda Civic Hybrid is on the way for 2024. With the introduction of the 2024 Honda Civic Hybrid, Honda is bringing back electrification for one of its most popular cars. While the compact hybrid will be offered as both a sedan and hatchback, there is scant little we know about the specifics of the new electrified Civic. We’re just happy that the Honda Insight is finally getting a replacement.

One thing we do know is that the 2024 Honda Civic Hybrid will not come with a plug-in hybrid alternative. For now, only traditional hybrid powertrain options will be available in the upcoming model. However, the gasoline Civic models will remain untouched; the hybrid models will simply be an alternative choice. It is a part of Honda’s greater strategy to slowly transition buyers to electrified vehicles rather than trying to force a switch.

Honda’s plans to hybridize its complete lineup are no secret. The 2024 Honda Civic Hybrid is simply another step in this process. They view hybrid vehicles as an important bridge to full-EV adoption for most buyers. The current goal is to have a 50/50 mix of hybrid and non-hybrid Honda CR-V and Accord models, while adding the Civic Hybrid next year to further expand the range. 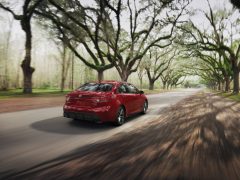 The 2023 Toyota Corolla Hybrid Gets You a Fuel-Efficient All-Wheel Drive Car Under $30,000

The last time we saw a Honda Civic Hybrid sold on U.S. shores was in 2015. This model combined a four-cylinder engine and electric motor, but made just 110 total horsepower. Fuel efficiency was excellent though, returning 44 mpg city and 47 mpg highway. While its safe to say that the new Civic Hybrid will pack a bigger punch, we don’t yet know any specifics. Honda has been quiet on specs for the new Civic Hybrid. However, a look overseas can tell us what to expect.

Honda sees a Civic Hybrid as a necessary strategy

While the car market has shifted toward larger vehicles, Honda will continue delivering smaller cars. Diallo is quoted as saying “The market has shifted away from passenger cars, but cars still matter to Honda. The cars bring in younger, more multicultural buyers to the brand.” That should be encouraging news to enthusiasts everywhere, even as electric and hybrid vehicles gain traction.

No specifics are available regarding performance of the 2024 Honda Civic Hybrid. That said, European versions of the car use a four-cylinder engine and two electric motors for a combined 181 horsepower. Meanwhile, the 2022 Honda Accord Hybrid sold here offers 204 ponies. Even better, the Accord Hybrid is good for 51 mpg city and 48 mpg highway.

We expect that the new Civic Hybrid will use one of these two powertrains when it goes on sale early next year. And frankly, the punchy turbo-hybrid Accord powertrain would be a blast in the smaller Civic. We’ll know more as the year goes on, and will provide updates as more details on the 2024 Honda Civic Hybrid come to light.