If you are familiar with the world of mid-size trucks, you likely know about the 2023 Toyota Tacoma. The Tacoma has long been Toyota’s smaller truck, and it has a reputation for reliability and capability. One of the most sought-after versions of this pickup is the TRD Pro model. But, that is not the only TRD treatment that this truck gets.

The Toyota Tacoma TRD Pro is a mid-size truck focused on off-road capability. It comes standard with a V6 engine, along with four-wheel drive. The engine makes 278 horsepower and 265 pound-foot of torque, which is ample power for a vehicle of this size. Also notable is the long list of off-road tech featured in this Toyota pickup.

Features of the Tacoma TRD Pro include things like FOX internal bypass shocks, skid plates, and a six-speed manual transmission. At the same time, this all does come at a high cost. The MSRP of the 2023 Toyota Tacoma TRD Pro is $46,685.

The TRD Pro isn’t the only TRD Tacoma

In addition to the TRD Pro model, there are also two other TRD Tacomas. These include the Tacoma TRD Off-Road and the Tacoma TRD Sport. Both models bring something unique to the table, and in some ways, they might be better for you than the TRD Pro.

The Tacoma TRD Off-Road comes with plenty of off-road goodies, and it is cheaper than the TRD Pro at $35,440. It features Bilstein shocks, a locking rear differential, and off-road drive modes. You can also get it with the manual transmission, and it comes in multiple configurations.

What is the Toyota Tacoma TRD Sport?

The Tacoma TRD Sport isn’t as focused on off-road capability. It comes with 4WD, or you can get it with rear-wheel drive. A notable design feature is the hood scoop up front, which gives this mid-size truck a more aggressive look.

The TRD Sport model is the cheapest of the TRD Tacomas. It has an MSRP of $34,160, which isn’t cheap but won’t break the bank either.

According to Car and Driver, the 2023 Toyota Tacoma TRD Off-Road seems to be the one to get. If you want to make it more capable, you can. Because the Tacoma has a thriving aftermarket community behind it.

When will there be a new Toyota Tacoma?

The current generation of Tacoma has been around for some time. It is expected that the next generation of this mid-size truck will come for the 2024 model year. That makes sense because Toyota just gave a major redesign to the Tundra full-size pickup. 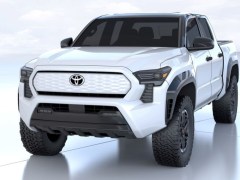 Will the Toyota Tacoma EV Be the Best Electric Pickup Truck?

Once Toyota updates the Tacoma, it is entirely possible that a new engine will be featured. And maybe there will no longer be a manual transmission offered. But one thing is certain, the TRD treatment will still be offered to Toyota’s mid-size truck. Giving consumers the option for a vehicle that is ready to off-road right from the factory. And that is definitely a good thing.