The Toyota RAV4 was one of the pioneering models for the compact crossover SUV segment. It now faces stiff competition from other vehicles, though, such as the Kia Sportage. However, there’s something that enables the RAV4 to stay ahead of the competition. The 2023 Toyota RAV4 has one giant advantage over the 2023 Kia Sportage: the RAV4 Prime plug-in hybrid (PHEV). It delivers better fuel economy and performance than anything that the Sportage offers.

When either of the two plug-in hybrids run out of battery power, they can just switch to power from the gas engines. This makes them good alternatives to electric cars, for “range anxiety” won’t be an issue.

Considering that gasoline is one of the biggest costs of vehicle ownership, an efficient crossover SUV like the RAV4 Prime can save drivers a great deal of money at the fuel pump. Also, the higher gas mileage and electric driving range for the RAV4 Prime results in fewer stops at gas stations compared to the Sportage Plug-In Hybrid.

Another benefit of the 2023 Toyota RAV4 Prime crossover SUV is its high-level performance. It’s the best-performing model in the RAV4 lineup — and better than anything that the 2023 Kia Sportage offers. The plug-in hybrid system in the RAV4 Prime generates a total system output of 308 horsepower. In comparison, the Sportage PHEV only produces 261 horsepower.

With its powerful plug-in hybrid system, the RAV4 is fast. It provides sports car-like acceleration with a 0-60 mph time of 5.5 seconds. In comparison, the Sportage Plug-In Hybrid, while faster than other Sportage models, takes 7.1 seconds to complete the 0-60 mph sprint.

Other advantages of the Toyota RAV4 over the Kia Sportage 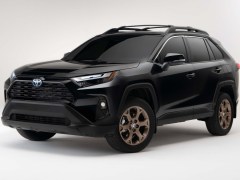 In addition to its more capable RAV4 Prime plug-in hybrid model, the 2023 RAV4 has some other advantages over the 2023 Sportage. This includes better off-road capabilities. Both crossover SUVs offer a traction-enhancing all-wheel drive system. However, the RAV4 has higher ground clearance than the Sportage for driving on rugged terrain (up to 8.6 vs. 7.9 inches).

Also, while the Sportage offers rugged X-Pro models, they aren’t as capable for off-road driving compared to the RAV4 TRD Off-Road trim. The RAV4 also has other off-road models with the Adventure and Wilderness trims.

Another advantage of the RAV4 is maneuverability. It has a turning circle of 36.1 feet, compared to 38.6 feet for the Sportage. Also, the RAV4 has a complimentary maintenance plan (two years/25,000 miles), but the Sportage doesn’t offer one.

With the ultra-efficient and high-performance RAV4 Prime plug-in hybrid, the 2023 Toyota RAV4 has a giant advantage over the 2023 Kia Sportage. When determining which crossover SUV you should choose, the RAV4 Prime is a key thing to keep in mind.