Sedans and hatchbacks have fallen out of favor as consumers increasingly buy trucks and SUVs — but the Toyota Corolla compact car continues to be a major success. Another successful one is the Mazda3. Both are solid models. However, the 2023 Toyota Corolla has one huge thing that the 2023 Mazda3 doesn’t offer: an efficient hybrid model.

Unlike the 2023 Mazda3, the 2023 Toyota Corolla offers an efficient hybrid model

Toyota is the industry leader for hybrid vehicles, with decades of experience perfecting the technology. Many automakers have followed Toyota’s lead on hybrids, but the Japanese automaker remains the gold standard. It has hybrid versions of many of its models, including the 2023 Toyota Corolla compact car.

Conversely, the 2023 Mazda3 doesn’t offer a hybrid model in the United States. All of the vehicles in the American-spec Mazda3 lineup are fully gas-powered.

The most obvious benefit of the hybrid powertrain in the 2023 Toyota Corolla Hybrid is its high gas mileage. With its high fuel economy, owners of the Corolla Hybrid can save a great deal of money at the fuel pump over the long haul. While gasoline isn’t as expensive as it was in 2022, it’s still one of the most significant costs of vehicle ownership.

The Corolla’s hybrid powertrain derives power from two electric motors and a 1.8-liter four-cylinder engine. It delivers an impressive estimated fuel economy of up to 53 city/46 highway mpg. Efficiency for the compact car is further enhanced by an Eco driving mode. Also, there’s a regenerative braking system. It captures energy emitted from braking — and then channels it to the battery, helping to improve fuel economy.

Even if you opt for the fully gas-powered version of the Corolla, you can still benefit from high fuel economy. It gets an estimated gas mileage of up to 31 city/40 highway mpg.

However, the 2023 Mazda3, with its full gas-powered engines, is less efficient. It gets an estimated fuel economy of up to 28 city/37 highway mpg. Compared to Mazda3, the Corolla Hybrid gets 25 more mpg for city driving and nine more mpg for highway driving.

Another benefit of the high gas mileage of the Corolla is convenience. With its lower fuel consumption, it requires fewer stops at gas stations compared to the Mazda3.

Other strengths of the Toyota Corolla over the Mazda3 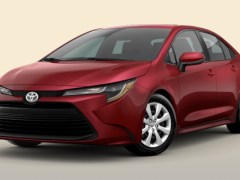 In addition to its efficient hybrid powertrain, the 2023 Corolla compact car has some other strengths over the 2023 Mazda3. This includes reliability. It’s more reliable than the Mazda3. Consumer Reports named the Corolla Hybrid the most reliable car. The fully gas-powered model is reliable too — with it placing seventh.

With its efficient hybrid powertrain, the 2023 Toyota Corolla has a huge advantage over the 2023 Mazda3. When choosing which compact car to get, this is a crucial factor to consider.