Is the 2023 Mitsubishi Outlander PHEV worth buying?

Yes, the 2023 Mitsubishi Outlander PHEV is an excellent plug-in hybrid SUV to consider. It could be one of the most improved vehicles of the year, with an upgraded interior and plenty of value.

Plus, the Outlander PHEV has three rows of seating, providing more space for passengers. It also got some off-roading upgrades to improve its capabilities. The RAV4 Hybrid TRD Off-Road might need to be worried.

The 2023 Mitsubishi Outlander PHEV gained some traditional SUV upgrades to become more confident and capable. It’s now 2.4 inches wider to improve stability and cargo space. It could also have a smoother ride.

It rides on standard 20-inch wheels wrapped in Nexen Roadian GTX 225/45-profile all-season tires. It has a revised battery pack that helped increase the ground clearance from 7.3 inches to 8.3 inches.

The 2023 Outlander PHEV has a 2.4-cylinder engine that’s paired with an electric motor and a 20-kWh lithium-ion battery pack to generate 248 hp and 332 lb-ft of torque. It can accelerate from 0 to 60 mph in 6.5 seconds, which is impressive.

It’s a bit behind the Toyota RAV4 Prime and its ability to reach 60 mph in 5.6 seconds, but it’s a smidge faster than the Ford Escape PHEV.

The Outlander PHEV gets an EPA-estimated electric range of 38 miles before gas kicks in. It can travel about 420 miles between fill-ups. It gets 26 mpg once the batteries run out of juice. There are a few different regenerative braking modes to replenish its power.

You can recharge the battery in about 6.5 hours with a 240-volt or level 2 charger. With a DC fast charger, you can replenish to about 80 percent in around 38 minutes.

The suspension was retuned to account for the extra weight and size of the chassis. Plus, the Super-All-Wheel Control (S-AWC) system sends power to specific wheels for an athletic and engaging performance.

Does the 2023 Outlander PHEV have better features? 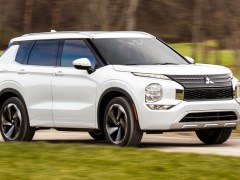 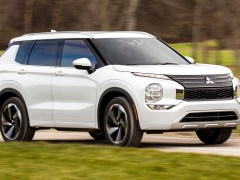 Are the 2022 Mitsubishi Outlander and Nissan Rogue the Same?

Yes, the 2023 Mitsubishi Outlander PHEV is much improved with a higher-quality interior. It features soft-touch covered surfaces with available quilted leather upholstery and massaging seats.

The third-row seats can now fold flat, and the cargo capacity has been improved. You can access up to 33.5 cubes in the rear and up to 75.8 cubes overall.

A 12.3-inch digital gauge cluster and a 9.0-inch infotainment system are standard. But Apple CarPlay and Android Auto have wired connectivity.

The new Outlander is bigger, more refined, comfortable, and capable. It has transformed into a well-rounded option that’s value-packed.