“From sea to shining sea” that’s how the story of the United States goes. With majestic purple mountains, incredible desert sands, and rugged terrain, vehicles must be tough to leave the paved roads. The new 2023 Honda Pilot TrailSport was entirely developed in the United States to handle the rugged terrain offered. This impressive midsize three-row SUV has the chops to tackle most trails; let’s see what makes the Pilot TrailSport tick.

Does the 2023 Honda Pilot TrailSport include exclusive off-road hardware?

The names might be the same as what you find in other trucks and SUVs, but the features have been developed specifically by Honda for the TrailSport trim of the Pilot SUV. Some of what you’ll find in this rough-and-tumble three-row crossover are:

Is the Honda Pilot TrailSport lifted?

Is there anything significant about the Honda Pilot TrailSport Interior?

This Honda SUV is the only vehicle in its class with seating for eight and an opening panoramic sunroof. While out on the trails, you can welcome the outside air into the cabin through this roof. This trim doesn’t take anything away from the expected comfort in order to be a rugged off-roader. Instead, you’ll benefit from the impressive size, bringing up to 113.67 cubic feet of cargo room behind the front row of seats.

Keep an eye on the trails with the TrailWatch camera system

The TrailSport trim includes a new TrailWatch camera system. This feature allows you to see what’s going on around the Honda Pilot while out on the trials. This camera system has come in handy during testing on some of the most rugged trails in the United States. It should be useful for the weekend off-roader or an adventurer enjoying several weeks away from the busy world.

Where has the new 2023 Honda Pilot TrailSport been tested?

Honda took this off-road capable SUV to some of the toughest off-road locations in the United States. The TrailSport has tacked the red rocks of Moab, Utah, moved through the deep sands in Glamis, California, and took on the muddy trails and hills in Kentucky and North Carolina.

The TrailSport even ventured into the Rebelle Rally, proving this three-row SUV is much more than just another pretty face.

Is there an exclusive paint color for this off-road Honda SUV?

The Diffused Sky Blue paint color is an exclusive 2023 Honda Pilot TrailSport paint color. You can have other colors for this trim, but this one isn’t offered on any other trim. You’ll also find some trim-specific orange contrast stitching in the head restraints. This stitching offers the TrailSport logo.

Should you drive the 2023 Honda Pilot TrailSport?

If you need room for up to eight people and want to drive a vehicle that handles off-road challenges like a champion, the TrailSport is the right trim of this midsize Honda SUV for you. This trim is specifically made for the rugged off-road terrain found in the United States; how can you think any other SUV in this class could do better?

Next, check out the sporty driving dynamics of the Pilot, or learn more about the development of this new Honda Pilot TrailSport in the video below: 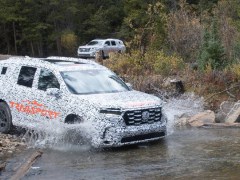