Midsize SUVs are very popular these days, and two of the leading choices are the Honda Pilot and the Chevy Traverse. While both SUVs have multiple strong points, in 2023, there’s an important factor in the Pilot’s favor. The 2023 Honda Pilot has one giant advantage over the 2023 Chevy Traverse: a superb redesign.

The 2023 Honda Pilot is much improved for the new model year with its outstanding redesign. In redesign years, the Pilot was starting to get stale and outdated, but Honda addressed this with a complete overhaul for the midsize SUV. Conversely, the 2023 Chevy Traverse is a carryover model with only minor changes. The Traverse hasn’t been redesigned in five years. If you desire the newest look for a midsize SUV, then the Pilot is the way to go.

Compared to the outgoing model, the redesigned Pilot is more rugged, with a boxier shape and truck-like styling. It has a strong horizontal beltline, flared fenders, and a large upright grille. Also, to give the Pilot a more sporty appearance, Honda pulled back the A-pillars and gave the vehicle a longer hood. Additionally, at the rear, there are new LED taillights and a body-colored roof spoiler.

Unlike the 2023 Traverse, the 2023 Pilot has an off-road model with the TrailSport trim

Another addition for the 2023 Honda Pilot midsize SUV is the new TrailSport trim. Off-road capable SUVs are in greater demand as drivers long to experience some wilderness adventures. Honda meets this demand with the Pilot TrailSport. However, the 2023 Chevrolet Traverse doesn’t offer an off-road model.

For the exterior design, the TrailSport has an even more rugged look than the standard Pilot model. It also comes equipped with off-road features for excursions off the beaten path. This includes a trail torque logic off-road system, a TrailWatch camera system, 18-inch wheels with inset spokes, and stabilizer bars.

Additionally, there’s an off-road-tuned suspension, which provides extra ground clearance with a one-inch lift. Plus, for optimal traction on rough terrain, the TrailSport comes standard with the upgraded i-VTM4 torque-vectoring all-wheel drive system.

Other strengths of the Honda Pilot over the Chevy Traverse 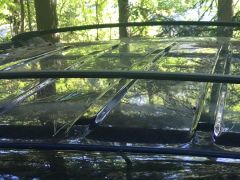 Why Do SUVs Have Ridges on the Roof?

In addition to its redesign and new TrailSport model, the 2023 Pilot midsize SUV has some other strengths over the 2023 Traverse. It had a growth spurt, resulting in what Honda claims is a class-leading amount of interior space. This includes a generous amount of space for storage, with a maximum cargo capacity of 113.7 cu-ft, compared to 98.2 cu-ft for the Traverse. Also, the Pilot has many cupholders and useful storage compartments.

Furthermore, like other new Honda models, the Pilot offers a new complimentary maintenance plan — with two years or 24,000 miles of coverage. However, the Traverse doesn’t offer a free maintenance plan. Plus, the Pilot is slightly more efficient for city driving. It has an estimated gas mileage of up to 19 city/27 highway mpg, compared to 18 city/27 highway mpg for the Traverse.

With its redesign, the 2023 Honda Pilot has a giant advantage over the 2023 Chevy Traverse. When making a choice between the two midsize SUVs, the redesign is a crucial factor to keep in mind.