The Honda Civic enters 2023 as an affordable and reliable compact sedan, building on a 50-year reputation for excellence. A 2023 Honda Civic Consumer Reports review has looked at the latest model and found a familiar formula. And while both handling and efficiency are again highlights, the 2023 Honda Civic isn’t without fault. What you gain in both efficiency and fun is lost in overall refinement, so be sure to take that test drive before you decide if this is the car for you.

In the 2023 Honda Civic Consumer Reports review, two hallmark traits of this long-running compact stand out yet again. Both handling and fuel efficiency are impressive characteristics of the new Civic sedan.

If there is one thing the Honda Civic has done well, it’s to translate your actions behind the wheel into cornering and stopping responses. The 2023 Civic continues that legacy with sharp handling and excellent stopping power. We won’t get into all the clever engineering that has gone into the 2023 Honda Civic. But if there is one thing you can always count on in any Civic model, it’s that the handling will put a smile on your face on any twisty road. Even with electronic power steering, the wheel has plenty of feel to keep you engaged. And with four-wheel disc brakes, the new Civic pulls up in less than 180 feet from 60 mph.

In addition to excellent handling, the Honda Civic also has a reputation for efficiency. In the 2023 Honda Civic, this continues with a 2.0-liter four-cylinder engine that delivers 33 mpg combined. The non-turbo is good for 158 horsepower, which won’t win you many races between the lights. But if you’re looking for an engaging and efficient compact sedan, you can’t go wrong with the Civic’s tried-and-true formula. 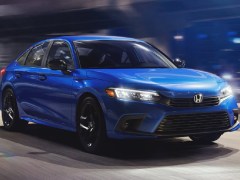 While the latest Honda Civic certainly performs well on paper, it does lag behind its competitors in a few areas. While ride quality and cabin comfort aren’t everything, the 2023 Honda Civic Consumer Reports review notes some drawbacks.

Fuel efficiency and lightness typically go hand-in-hand. Unfortunately, lightness also means more noise inside the cabin. Lighter materials and thinner panels can contribute to lower vehicle weight, but they also make the inside of the Honda Civic a bit noisy at highway speeds. Both wind and road noise are more pronounced than competitors like the Hyundai Elantra and Toyota Corolla. That said, the Civic still allows you to converse while cruising to the office. You may just need to speak a bit louder than you’re used to.

Meanwhile, the impressive handling of the 2023 Honda Civic does lend a harsher ride than some competition. Once again, the trade-off is relative; it is by no means a backbreaker. But the agreeable ride of the Volkswagen Jetta and Nissan Sentra make the Civic feel a bit rough by comparison. We suggest upgrading to comfort-focused tires to reduce harshness and cabin noise when buying a new Honda Civic.

It’s hard to argue against buying a 2023 Honda Civic. The 2023 Honda Civic Consumer Reports analysis offers many plus points. Only minor lapses in refinement counter these pros and are easy to fix with simple upgrades. The excellent starting price and reliable reputation of the Civic make it an easy choice for anyone looking for a great new car value.