I want to say that picking MotorBiscuit’s Car of the Year was difficult. Despite the other great cars we drove, there seemed to be only one option. Dragging our choice out would be like picking teams at the local YMCA with Jimmy Butler in the lineup and trying to “decide” who you want first. I drove the 2022 Chevrolet Corvette earlier this year, and it demanded a place in my heart. We are happy to announce MotorBiscuit’s 2022 Car of the Year is the 2022 Chevrolet Corvette.

How did we pick MotorBiscuit’s 2022 Car of the Year?

Our process for picking the winning vehicles of the year starts by driving them for a week at a time. Once we have spent this time and typically logged a few hundred miles, we rate and review them. At the end of the year, we compile the highest rated of each category and present them to our team, where we then vote on personal favorites. Once the votes are cast, we review the votes against the ratings and make our final decision.

The process relies heavily on data punctuated by feeling. You can’t discount feeling. Never discount feeling. Ultimately, our winners of each category need to be objectively good while also appealing to something deeper, something a little less true but somehow more honest.

This year, we drove many great cars, trucks, SUVs, and motorcycles. Things like throttle feel, steering feedback, or seat comfort can get fuzzy and ultimately meld into an amorphous blob of specs and data. However, some manage to stick with us. More than just good and bad, the cars that stick in our minds are the special ones, the ones with a story, personality, and presence.

That said, the mid-engined Corvette 2LT has the sauce. This is partly why Car and Driver also included the C8 in their Editor’s Choice List. Before we get into specs, this newest interaction of Corvette is one of the most impressive cars I’ve ever driven. I’ve been lucky enough to have driven faster cars, nicer cars, better-handling cars, and certainly more luxurious cars over the years. However, I have never driven anything quite like the 2022 Corvette.

The C8 marries the blue-collar, distinctively American love of value with a true shot at finely-wrought European pure-bred automotive finesse. The idea that unbridled muscle should be available to all Red-blooded Americans is fundamental. I’m convinced the founding fathers were forced to omit that part in the preamble to the constitution merely for lack of space. Despite my dumb jokes, the feeling that the Corvette could be yours is palpable. This matters. Ferraris are a thrill to drive, but I was never tempted to buy one because it’s always been too silly even to dream. I digress.

So much of what we love about the Corvette is that you are driving a car that looks too extreme and exotic to be driven by anyone who has ever worn a nametag to work, yet I promise you many of the C8’s owners have, and some probably still do. That’s a beautiful thing.

For $80,000 (the price of my test rig), you’d be hard-pressed to find such a competitive sports car from any era, much less the bloated luxury market we live in today. Forgetting for a moment the current situation with dealership markups, the Corvette starts at a truly amazing $62,145. Think about that for a second. That is less than many pickup trucks today. That’s less than your average fully-loaded three-row SUV. What Chevrolet charges for the Corvette is nothing short of a miracle in the name of American sports cars.

But what makes that so amazing, you ask? The 2022 Corvette comes in only three trim options, the 1LT, 2LT, and 3LT. Within those brackets, some other performance options and price points are available. However, in its lowliest and most-natural form, the 2022 Corvette 6.2-liter V8 makes a remarkable 490 hp and 470 lb-ft of torque.

If power is the lead singer in the Corvette’s band, handling is the guitar player. In my review, I wrote something to the effect of, “The Corvette feels big, not exactly clumsy, but still big, like the T-Rex that manages to keep up with the Ford Explorer in Jurrasic Park…” or something like that, and I still stand behind that. It seems like it shouldn’t be able to handle the really tight stuff, but it does. It does like hell.

Go with what you love 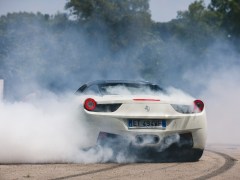 Look, I won’t argue that loving a car is enough to make it a good one. In fact, most of the cars I’ve really loved were fairly bad cars. However, the 2022 Chevrolet Corvette is one of the few that seems to match the easy-to-love charm of the car with the chops to back that love up on paper. The 2022 Corvette is the people’s champ. It brought the mid-engined supercar to the people.

This is why we picked it for our MotorBiscuit’s 2022 Car of the Year. We love driving it, we love looking at it, we love hearing it, but ultimately we just love it.