Sometimes a used SUV makes more sense than purchasing a used one. And that is where the 2013 Nissan Rogue comes in. The Rogue has long been a popular crossover in the United States, and in recent years it has been vastly improved. Still, purchasing one that is nearly 10 years old will help you find something more affordable. But is it actually worth it?

Is the 2013 Nissan Rogue reliable?

In terms of reliability, the 2013 Nissan Rogue might not be the best choice. Although safety scores are average, this year of Nissan Rogue did face some problems. Additionally, only one engine is available. And to some, that powerplant might feel a little bit underpowered.

According to J.D. Power, reliability is average. But owner reviews tell a different story. Apparently, there are significantly more issues when compared to the 2012 model. Major problems include transmission failure, engine trouble, and even paint chipping.

As a compact SUV, it might be best to avoid the 2013 Rogue. But if you are aware of the potential problems, you can stay on the lookout for warning signs. Generally speaking, you can find a used Rogue between $8k and $15k, depending on configuration and condition.

The 2013 Rogue is available in three trims

At the time of its release, the 2013 Nissan Rogue came in three distinct trim levels. These trims include:

The Rogue does tend to drive more like a car than an SUV. And that might be a plus to some. Although it can’t be described as engaging, it’s competent enough for daily use. Another perk of this crossover is that it can be had with all-wheel drive. So, if you want a used SUV with AWD, this might be it.

Is the Nissan Rogue a good car?

For the 2023 model year, the Rogue does have a lot to like about it. It now comes with a three-cylinder engine that makes 201 horsepower. The suspension is competent, and there are plenty of standard and available features. 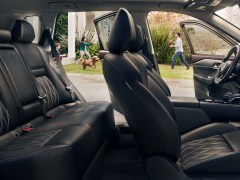 One perk of the new Rogue is that it starts with an MSRP of under $30,000. But, if you go for the Platinum model, you will be paying nearly $40k. It might be best to set your sights on the SV trim. It has a good mix of value and features.