Older Hyundai cars and SUVs were never too synonymous with being reliable. However, they have come a long way in the past few years. But if you’re looking to get into a comfortable sedan, a 2009 Hyundai Genesis is a good choice for its features. But can you count on it to be reliable?

Before we get into what the critics have said about the 2009 Hyundai Genesis, it’s important to see what real-world owners think. According to the consumer reviews on Cars.com, the Genesis is “great for the price” and “has not given me a single issue since I purchased it.” Many owners stated that it’s “very classy” and is “built to last,” along with having a luxurious and practical interior.

That’s much praise for the South Korean automaker, which was one the butt of jokes in the automotive world at the turn of the century. However, no one, including the owners of many 2009 Hyundai Genesis examples, is laughing anymore.

Automotive critics have proven that the 2009 Hyundai Genesis is reliable

Testimonials from real Genesis owners are one thing, but reports from automotive critics, who really put cars to the test, are another. As such, the editors at Car and Driver put a long-term 2009 Hyundai Genesis test mule through two years of “torture testing” over the course of 100,000 miles back in 2011.

Their testing consisted of many long and short road trips, track testing, and routine maintenance and repairs. After two years of use, the editorial group reported spending a total of $2,663 on 13 scheduled maintenance services and $1,528 for two new tires installed. In our opinion, that’s not bad for two years of hard use. Especially since 100,000 miles is also the length of the powertrain warranty.

In addition to Car and Driver’s testament to the Hyundai Genesis’ reliability and durability, JD Power gave the car an 88 out of 100 rating, which is considered “great” by the publication’s standards.

What does this vintage of the Hyundai Genesis come with?

Buyers looking to get into a 2009 Hyundai Genesis can expect a decent amount of luxury for the time period. After all, take one look at the Genesis, and it’s clear that Hyundai was squarely aiming for the Mercedes-Benz S-Class with its design. Under its hood was a choice between a 3.8-liter V6 that produced 290 hp and a 4.6-liter V8 that made 375 hp.

The latter was the obvious choice for the best performance, and both engines were paired with a six-speed automatic that sent the power to the rear wheels.

On the inside, the Genesis’ interior feels and looks a lot like its German competitors. Edmunds noted that the “seats are as comfortable as they appear” and the “white-on-black electroluminescent gauges look like they came straight out of a Lexus.” The rest of the interior consists of a sweeping dashboard design and soft-touch surfaces that give the car an upscale appeal.

As for features, the base Genesis comes with full power accessories, 17-inch wheels, heated leather front seats, and auxiliary jacks. Keep in mind that the car was made in 2009, so don’t expect Apple Carplay or Android Auto. However, the top-trim can be found with a Premium package that offers features like a Logic 7 surround-sound system, Bluetooth, and a navigation system. 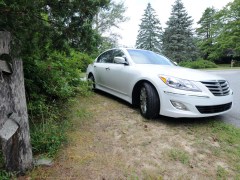 According to a recent nationwide search on CarGurus, a 2009 to 2010 Hyundai Genesis costs around $10,000, depending on the car’s mileage, condition, and location. That’s a good price for the type of style, luxurious amenities, and of course, reliability that you get.