The 2009 Honda Civic hails from the famous nameplate’s eighth generation, which was sold from 2005-2012. The eighth-generation Civic was generally considered very high quality for its time, especially compared with the ninth-generation, which some claim was a step backward in quality. Most people consider Hondas good cars, but is the 2009 Civic worth putting on your list?

The 2009 Honda Civic was offered in six trims, or eight if you include the Civic Si and the Natural gas GX, reports Autoblog. We won’t be including the Civic Hybrid in our overview.

The base DX trim level offered little beyond seats and a steering wheel. It didn’t even include an audio system or air conditioning, though thankfully, a heater was included. It’s probably best to opt for the VP (value package) or higher if you’re looking to daily drive your Civic. The VP trim adds A/C and a radio, which most modern consumers would consider mandatory. The LX trim upgrades from the 15” steel wheels to 16” and includes remote keyless entry. Not having to unlock the car with the key is an underrated luxury on a rainy summer day.

If you aren’t into the steel wheel look, the LX-S swaps them out for much more attractive 16” rims, and the EX adds a power sunroof. The most luxurious trim is the EX-L, which gets you heated leather seats and heated mirrors. The EX-L-trimmed Hondas from this period definitely punch above their weight class and make for a lovely place to be on a long road trip. All trims except the VP and LX-S could be ordered in a coupe or sedan body style.

As for the powerplant, the 2009 Civic was equipped with a 1.8L four-cylinder producing 140 hp and 128 lb-ft of torque, which makes for a spry-feeling little car. The Civic was offered with either a five-speed automatic or five-speed manual transmission. The Civic completed its 0-60 mph run in 9.8 seconds with the automatic and 7.3 with the manual, reports Motorweek. If you opt for the performance-oriented Si, you get a 197-hp 2.0L powerplant paired only with a six-speed manual.

Safety is not a concern with the 2009 Honda Civic

The 2009 Honda Civic received stellar marks from both the IIHS and NHTSA. The Civic received a “Good” rating in every category except for two related to the side impact test: Structure/Safety Cage and Driver Torso. The model still was awarded an “Acceptable” rating in those two categories. The 2009 Civic had front, side, and even overhead airbags making it one of the safest cars in its class for the time and a great option for a buyer looking to find a safe used car for a reasonable price.

As with any used car, check for any recalls that could compromise the vehicle’s safety. The 2009 Civic was a part of the infamous Takata airbag recall, so it is important to ensure that was taken care of in any Civic you purchase. The NHTSA website has all the relevant information.

If you don’t care about paintwork, the 2009 Civic is nearly bulletproof 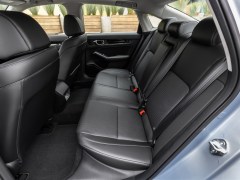 The most common complaint of the 2009 Honda Civic on CarComplaints is paint related, specifically the clear coat peeling. What’s surprising is that consumers reported this happens at an average of only 63,850 miles. The next most common issue is premature brake and tire wear because of poorly designed upper control arms. They were too short and could cause tire misalignment. There was a class action suit, and you can now get updated parts.

The R18A1 is a peach of an engine, but a few things are worth noting. First is a knocking sound that comes from the EVAP canister purge valve due to unadjusted valves, Dust Runners Automotive Journal reports. Most mechanics recommend adjusting your valve clearance every 20k-30k miles. Reports of motor mounts failing prematurely have also been reported, but it doesn’t seem particularly common. There isn’t much else to say about the R18A1 engine other than its incredibly reliable and long-lasting.

This generation of the Honda Civic was known for its comfort, efficiency, quality, and fun factor. This era is a high point in the life of the Civic, and its longevity speaks to that. An abundance can be found trading with over 200k miles. These Civic models are very safe for the time and even by today’s standards, especially if you opt for the sedan. Though the paintwork might be a little lackluster and require maintenance like any other car, a 2009 Honda Civic is a great used buy for anyone.