As a truck manufacturer, Ford has long been one of the leading brands in the eyes of consumers. Its F-series pickups have often been some of the hottest vehicles on the market. But not every brand gets it right 100% of the time, and Ford is no different. According to TopSpeed, these two Ford trucks are ones best avoided. Specifically, the 2004 F-150 and the 2008 Super Duty.

There might be some model years to avoid, but over the years, Ford has produced some pretty reliable trucks. It is possible that some new Ford trucks might have transmission problems. But, with proper maintenance, they should be able to pack on the miles.

According to RepairPal, the Ford F-150 has a reliability rating of 3.5/5. That does not make it one of the publication’s most reliable pickup trucks. But it does look like there is potential savings on maintenance. So, what are some of the least reliable Ford trucks?

The 2004 F-150 might be one of the least reliable F-150 trucks ever built. It utilizes the Triton engine, which is infamous in these vehicles. The engine had a number of issues, and those can lead to expensive repairs. The spark plugs might get ejected, the heads can warp, and to add to that, the transmission is prone to failure.

Overall, the 2004 F-150 has a 20 out of 100 in terms of reliability. So at the end of the day, it’s probably a good idea just to avoid this pickup if you want something that is ready to handle a serious number of miles.

Outside of engine issues, this era of F-150 was an improvement over the previous generation. Interior materials were updated, and the exterior styling is decent enough.

The Ford Super Duty is for those who need a heavy-duty truck. But according to TopSpeed, the 2008 variant isn’t the best in terms of reliability. Much like the 2004 Ford F-150, the 2008 Super Duty was prone to engine problems. 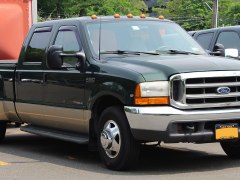 The Most Reliable Ford Diesel Truck According to MotorTrend

Things weren’t all bad for this truck, though. The paint holds up over the years, and the electrical system is reliable. When it comes to being a truck, you do want a powertrain that you can count on. And apparently, the 2008 F-250 and 2008 F-350 are lacking there.

In terms of which Ford Super Duty models are reliable, the 2013 year can be a fairly safe choice. But, when it comes to purchasing used, always be sure to do your due diligence. Even the most reliable truck can be questionable if it was not treated properly.

Ford produces a variety of trucks

When it comes to pickup trucks, Ford often leads the pack. Even if some models might be more reliable than others, generally speaking, the trucks are ready to get work done.

But, if you want a used Ford truck, it might be best to avoid the 2004 F-150 and 2008 Super Duty models. That way, you don’t have to deal with the well-documented issues that these pickups face.