Fast SUVs have become extremely popular in recent years. They give those that need a practical vehicle to enjoy an engaging driving experience. Although these SUVs are not as pure as something like a Porsche 911, they do offer legitimate speed. And according to TopSpeed, the Bentley Bentayga Speed and Aston Martin DBX707 are two of the fastest.

Does Bentley make an SUV?

Bentley first released its SUV back in 2015. And while the Bentley Bentayga is extremely expensive, it has been a big hit for the brand. In fact, there are multiple variants of this model, showing that the brand is heavily invested in it.

The fastest version of the Bentayga is the Speed model. It is powered by a 6.0-liter twin-turbo W12 engine. Clearly, this is not your average powerplant. Because of the W12 engine, the Bentayga Speed benefits from 626 horsepower and 664 pound-foot of torque.

In terms of top speed, the Bentayga Speed can achieve 190 mph. It might not be the fastest vehicle on public roads, but for an SUV, that is impressive. Unfortunately, for most, this luxury SUV is unattainable.

If you want to purchase one, you will be looking at an MSRP of at least $230,000. Now that price does get you a vehicle that feels bespoke and premium at nearly every level. Plus, you get to join the elite club of being a Bentley owner. Over $200k for an SUV is not an easy pill to swallow, though.

TopSpeed says this British SUV has the highest top speed

If you want the fastest SUV, you will need to look to this Aston Martin, the DBX. For 2022, Aston decided to give its flagship SUV some more power. But, not just a little bit of power, the DBX707 has 697 hp and 663 lb-ft of torque. Those two numbers translate into a top speed of 193 mph.

To put that in perspective, the Aston Martin DBX707 beats out vehicles like the Lamborghini Urus. And that is no easy feat. According to TopSpeed, the 0-60 mph time of this SUV is 3.1 seconds. That number might not be as quick as some electric vehicles, but it is still impressive.

How expensive is the Aston Marton DBX707?

With the speed and luxury of this vehicle, the DBX707 starts at $232,000. Because of that, the DBX is certainly not a cheap SUV. But Aston Martin is a well-known manufacturer of ultra-luxury sports vehicles. After all, James Bond drives an Aston.

We are in the era of fast SUVs

Although both of these SUVs are extremely expensive, it is not just luxury brands like Bentley building fast SUVs. Models like the Jeep Grand Cherokee TrackHawk show that brands understand the majority of consumers prefer a larger vehicle. And some of those drivers want a vehicle that is fast and can haul passengers. 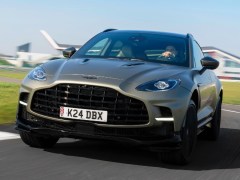 But if you want an SUV with the best top speed, you’re going to pay for it. Especially if the badge on your car says, Aston Martin DBX707 or Bentley Bentayga Speed.